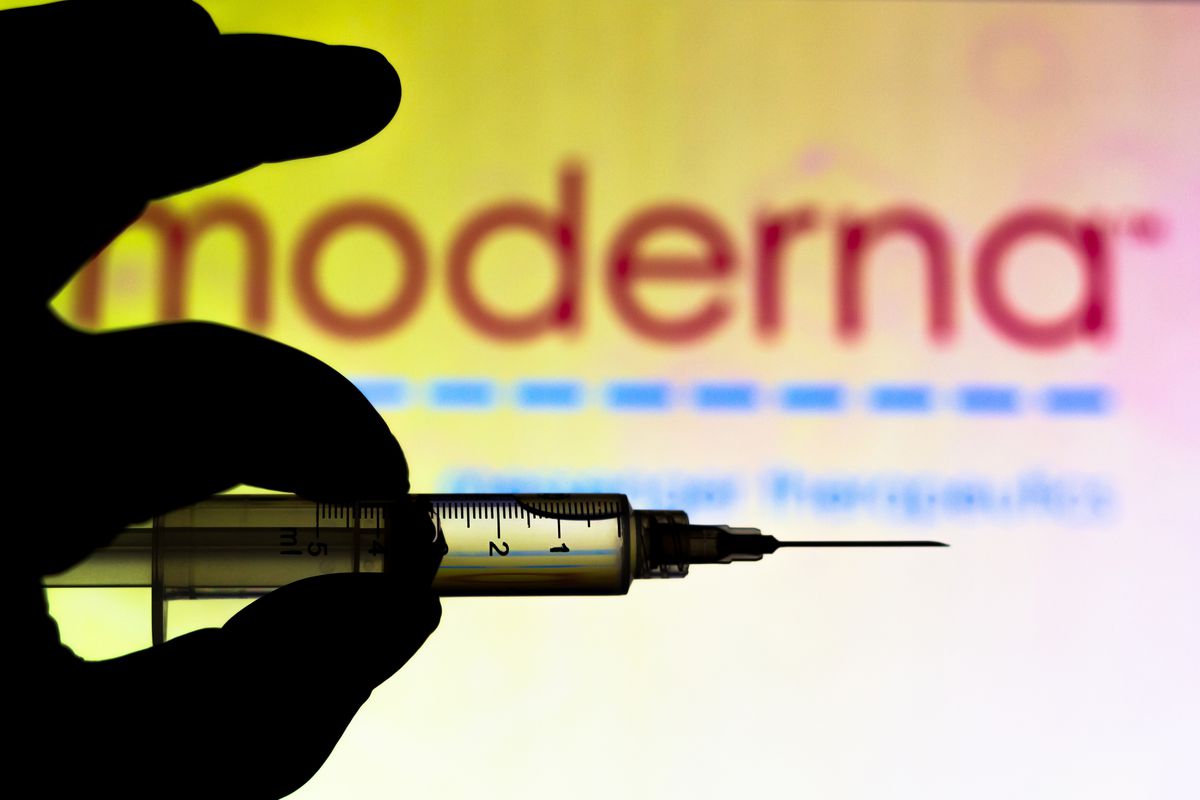 Moderna Inc. said its experimental coronavirus vaccine was 94.5% effective at protecting people from Covid-19 in an early look at pivotal study results, the second vaccine to hit a key milestone in U.S. testing.

Ninety-five people in the study developed Covid-19 with symptoms; of those, 90 had received a placebo and only five Moderna’s vaccine.

The findings, from a 30,000-subject trial that is still under way, move the vaccine closer to wide use, because they indicate it is effective at preventing disease that causes symptoms, including severe cases.

The vaccine also showed signs of being safe, though researchers and regulators must wait for more-complete safety data from the study, expected later in November. Moderna said it plans to ask federal health authorities by early December to clear the vaccine.

“We may be in a place with a vaccine that has a big impact on the prevention of severe disease,” Moderna Chief Executive Stéphane Bancel said in an interview. “That will be an incredible win against this awful virus.”

Anthony Fauci, director of the National Institute of Allergy and Infectious Diseases, said the high efficacy rate for Moderna’s vaccine means it could be an effective tool to help end the pandemic.

“These are very impressive and very encouraging and exciting results,” Dr. Fauci said.

Earlier this month Pfizer Inc. and BioNTech SE said their experimental Covid-19 vaccine was more than 90% effective at protecting people from symptomatic Covid-19 in a large clinical trial. Pfizer plans to ask the U.S. Food and Drug Administration this month to authorize use of the shot, setting up potential distribution to begin by the end of the year.

Though preliminary, the early results for the two vaccines suggest researchers can develop effective Covid-19 shots, which would be a big help in taming the pandemic.

“I think the high efficacy and data on severe cases mean that these RNA vaccines should markedly reduce the burden of hospitalization from Covid-19,” said Larry Corey, a vaccine specialist at the Fred Hutchinson Cancer Research Center in Seattle, and head of a network of clinical trial researchers who helped test the Moderna vaccine.

Moderna’s initial data were reviewed by a committee of independent researchers monitoring the study. The findings provide only a rough snapshot of whether the vaccine works. The company plans to release additional results later, including effectiveness in specific groups such as the elderly and against infections that don’t produce symptoms.

Researchers won’t have a full set of effectiveness data until a total of 151 people in the trial develop Covid-19 symptoms. Moderna expects that by the time it applies for government authorization, Mr. Bancel said. The company said the efficacy rate could change when more cases are analyzed, but the early numbers surpassed the high bar it had set for preliminary results.

Both the Moderna and Pfizer Covid-19 vaccines are among the most advanced in development in the West, along with candidates from AstraZeneca PLC, Johnson & Johnson and Novavax Inc.

Covid-19 vaccines developed in China and Russia have already been administered, though they haven’t finished the final stage of testing. Russia said last week its vaccine had 92% efficacy in a large trial.

Moderna’s vaccine, like Pfizer’s, uses a new technology known as messenger RNA. It works by delivering genetic instructions that teach human cells to make a protein resembling one found on the surface of the coronavirus. That triggers an immune response designed to protect vaccinated people if they are later exposed to the actual virus.

Moderna, a Cambridge, Mass., biotech that has been an mRNA pioneer, has never brought a drug or vaccine to market and no mRNA vaccine has ever been cleared by regulators. The National Institute of Allergy and Infectious Diseases worked with the company to develop its vaccine.

The federal government, under the Operation Warp Speed initiative, has committed about $2.5 billion to Moderna to support its vaccine research and testing and to buy at least 100 million doses of the vaccine.

In the Phase 3—that is, late-stage—study of its vaccine, people at about 100 U.S. locations were given two doses of the vaccine or a placebo, four weeks apart. Researchers tracked cases of symptomatic Covid-19 starting at least two weeks after the second dose.

The study’s design called for the independent committee to conduct the first interim analysis of efficacy when 53 people came down with symptomatic Covid-19. Moderna said the first analysis involved substantially more people because of the recent increase in Covid-19 cases nationally.

Among the 95 cases reviewed, 11 were severe, all in people receiving the placebo, Moderna said.

Moderna said the 95 Covid-19 cases included 15 people ages 65 years and older, and 20 people from diverse communities such as Hispanic or Latinx and Black people.

Because of the urgent need, the FDA plans to clear Covid-19 vaccines more quickly than is standard in a public health emergency. Technically, the authorization would be for emergency use, rather than a standard approval.

The FDA wants to see two months of safety monitoring for at least half of the 30,000 people in the trial, a milestone Moderna expects by the end of November. In the early look, the company said no significant safety concerns were reported, and the vaccine was generally well tolerated, with injection-site pain for some people after the first dose, and fatigue, headache and joint pain after the second.

If regulators do authorize the vaccine, the initial supply of doses will be limited—20 million, or enough for 10 million people, by the end of the year, Moderna forecasts. If the Pfizer vaccine is also authorized, federal officials said Monday they expect to be able to immunize about 20 million Americans during December.

The federal government may decide to vaccinate health-care workers and first responders first, followed by other segments of the population in phases until more doses are made next year.

Plans haven’t been finalized, but a National Academy of Medicine committee has recommended that the first phase of vaccination cover about 5% of the population and include front-line health workers such as those in hospitals and nursing homes, workers who provide transportation and other services to health-care facilities, and first responders.

The next phase would cover 10% of the population and include people with health conditions that put them at higher risk of severe Covid-19 disease or death, and people age 65 and older who live in settings such as nursing homes, long-term care facilities, homeless shelters and prisons.

Moderna is working with contract manufacturers to boost production so it can make 500 million to one billion doses next year. Its U.S. contract has an option for 400 million doses in addition to the initial 100 million. Moderna also plans to seek authorization in other countries, and has signed supply contracts with several.

Federal health officials cautioned Monday that despite the positive data for the vaccines, the limited initial supply also means that Americans should continue to take precautions against the coronavirus, such as wearing masks and washing hands.

Background
mRNA-1273 was developed by Moderna based on prior studies of related coronaviruses such as those that cause severe acute respiratory syndrome (SARS) and Middle East respiratory syndrome (MERS). A Phase 1 trial (NCT04283461) of 105 healthy participants provided the basis for Moderna’s investigational new drug application (IND), which was successfully reviewed by the FDA and set the stage for Phase 2 testing. A Phase 2 trial of 600 healthy participants evaluating 25 µg, 100 µg, and 250 µg dose levels of the vaccine was completed, and mRNA-1273 has advanced to a Phase 3 trial (NCT04405076). Study Design: A Phase 3 trial of 30,000 participants at high risk for SARS-CoV-2 infection who will receive a 100 µg dose of mRNA-1273 or placebo and then followed for up to 2 years (COVE trial; NCT04470427). Moderna posted the full trial protocol for COVE on 17 September.

Outcomes
Animal studies - Results from a challenge in a mouse model showed mRNA-1273 prevented viral replication in the lungs, and neutralizing titers in the mouse model were similar in participants receiving 25 µg or 100 µg doses of the vaccine. A study of nonhuman primates challenged with SARS-CoV-2 published in the New England Journal of Medicine had neutralizing activity, and limited inflammation and lung activity after being administered the vaccine. A paper published in Nature also showed mRNA-1273 induced neutralizing antibodies in mice. Human studies - Phase 1 data published in the New England Journal of Medicine showed mRNA-1273 successfully produced neutralizing antibody titers in 8 participants who received either 25 µg or 100 µg doses. The response was dose dependent in 45 participants across 25 µg, 100 µg, and 250 µg dose levels. In participants with available antibody data, neutralizing antibody titers were on par with what has been in seen in convalescent sera from people who have successfully fought off COVID-19. The vaccine also appears to be safe for older adults, with participants who received two 25 μg or 100 μg doses of the vaccine experiencing mild or moderate effects consisting of fatigue, chills, headache, myalgia, and injection site pain, according to data from the Phase 1 trial published in the New England Journal of Medicine.

Status
On 12 May, the FDA granted Fast Track designation to mRNA-1273. A Phase 3 trial of the vaccine is underway, which is being funded by Operation Warp Speed. The UK’s Medicines and Healthcare products Regulatory Agency (MHRA) has begun a real-time review of mRNA-1273, which will allow a quicker approval process for the vaccine.

OTHER STORIES FROM International News

1. Vaccine Status 2020 [Pfizer-BioNTech]2. How to wash your hands from COVID-19 Infection

Hello User! The Ethiopian pediatrics society has availed the online course on Immunization in Practice
[Course]

© Ethiopian Pediatrics Society 1995-2021. All Rights Reserved.
All trademarks displayed in this web site are the exclusive property of the respective holders.